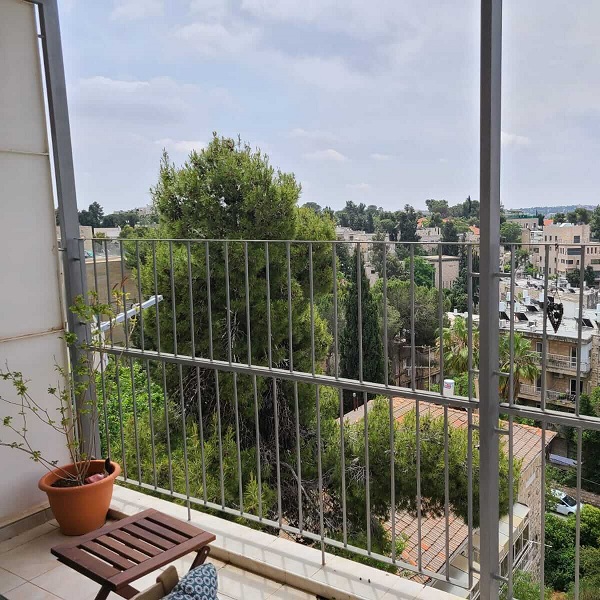 Rehavia is an upscale Jerusalem neighborhood located between the city center and Talbieh. The suburb received its name from Eliezer Yelin, its first inhabitant, and one of its early architects, and was named after Moses’ grandson, “Rehavia”.

Rehavia was established on a large plot of land purchased in 1921 from the Greek Orthodox Church by the Palestine Land Development Company (PLDC) and the first house was completed in 1924. It was given the biblical name Rehavia. The area was known at the time by the Arab name of Ginzaria, a native Jerusalem plant. The Jewish National Fund (JNF) bought the land and commissioned the German-Jewish architect Richard Kauffmann to design a garden neighborhood. Kauffmann, who spelled the name of his project as Janziriah, created a typical Garden City neighborhood, with gardens surrounding the houses and an orderly, but not too strict grid of streets and footpaths set in relation to the main boulevard cutting through the area, thus avoiding an excessive sense of symmetry. For legalistic reasons the land had to be transferred back to the PLDC in exchange for lands in the Jezreel Valley, but the JNF retained some real-estate in the neighborhood. The Gymnasia Rehavia high school, Yeshurun Synagogue, and the Jewish Agency building were built on this land, overlooking the Old City. Rehavia’s general outline was modelled after the garden cities of Europe, while the architecture of the buildings shows an emphasis on the International Style popular at the time.

The Prime Minister’s Official Residence is the”Aghion House”, at No. 3 Balfour Street near the intersection of Smolenskin Street.

When the Ethiopian emperor Haile Selassie was exiled from Ethiopia in 1936, he lived on Alharizi Street. Rehavia became known as a neighborhood of upper-class Ashkenazi Jews; home to professors and intellectuals, particularly émigrés from Germany. Many of the country’s early leaders lived in Rehavia: David Ben Gurion, Israel’s first prime minister, who lived on Ben Maimon Street, Zionist leader Arthur Ruppin, Menachem Usishkin, head of the Jewish National Fund, Golda Meir, Israel’s fourth prime minister, Daniel Auster, the first Jewish mayor of Jerusalem, and philosophers Hugo Bergmann and Gershom Scholem. Among the government ministers who made their home in Rehavia were Dov Yosef and Yosef Burg.

Landmark buildings in Rehavia include the headquarters of the Jewish Agency for Israel, the windmill on Ramban Street, and the Ratisbonne Monastery.

Gymnasia Rehavia, the country’s second modern high school (after Gymnasia Herzliya in Tel Aviv) was built on Keren Kayemet Street in 1928. Yitzhak Ben-Zvi, who was to become the second president of Israel, and his future wife, Rachel Yanait, were teachers there.

In the center of historic Rehavia is Yad Ben-Zvi, a research institute established by Ben-Zvi. Jason’s Tomb was discovered during construction work on Alfasi Street.

Most of Rehavia’s streets are named after Jewish scholars and poets from the Golden Age of Jewish culture in Spain. Among them are Abarbanel, Ben Maimon, Ibn Ezra, Rabbi Moses ben Nachman (Ramban) and Radak. A glaring omission is the name of Yehuda Halevy, celebrated physician, poet, and philosopher. Zionist leader Menachem Usishkin, who lived on Rechov Yehuda Halevy, changed the name of the street to Rechov Usishkin in honor of his 70th birthday in 1933, and installed new ceramic signs crafted by local Armenian craftspeople.

All Homes and Real Estate For Rent and For Sale in Rehavia. For information, contact us now