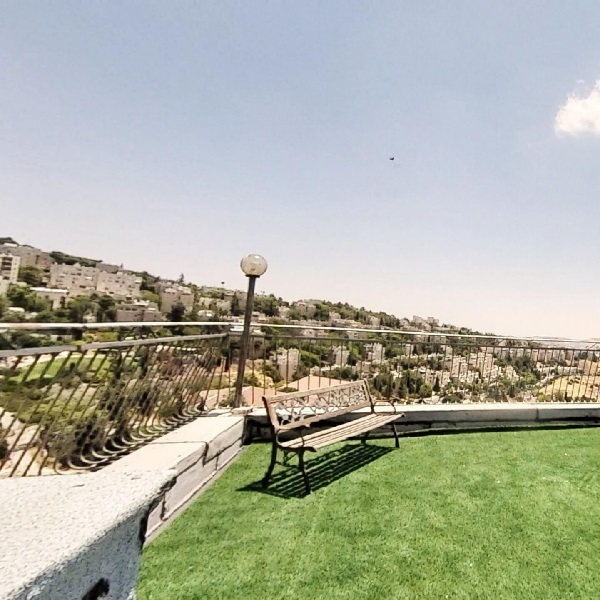 It’s a must in every tour of the city of Jerusalem-the breathtaking Haas Sherover Promenade, popularly known as the Tayelet, with its unobstructed sweeping views of the Temple Mount, Judean Hills, and on a clear day, the Dead Sea.

Very near this famous Jerusalem landmark is the neighborhood of Armon Hanatziv, popularly known as East Talpiot.

Biblically, Armon Hanatziv was where Abraham and Isaac were able to see Mount Moriah, after their long and arduous 3-day trek from Beer Sheva. Later, its topography was used to build an aqueduct that brought water from the springs of Gush Etzion, traveling through Armon Hanatziv, and from there to the Temple Mount; its final destination. More recently, in 1933, ‘the Residency’, the residence cum offices of the British High Commissioner was built on the ridge next to the Tayelet. In Hebrew it was called Armon Hanatziv and it from that beautiful monument of British rule that the neighborhood got its name.

The entire neighborhood is built on a large mountain, and from a bird’s-eye view it looks like a large amphitheater opening out to the Judean Mountains, Jordan, and the desert. The unique topography and the view is its major selling point. From many apartments in Armon Hanziv, one can see as far away as the blue of the dead sea to the east and the Herodion to the south.

Armon Hanatziv is one of the most outlying neighborhoods of Jerusalem, and it is surrounded by open vistas on two sides. Its northern boundary is the village of Jabar Mukabar and to the west the neighborhood of Arnona.

The beginnings of Armon Hanatziv go back to the 1920’s when a sprinkling of houses was built as a southern garden suburb of Jerusalem. In those times, it was not called what it is today

Rachel Gluck, a real estate expert with the RE/MAX Vision real estate agency, and herself a resident of Armon HaNatziv told ‘In Jerusalem’, “the real estate market in this area is very lively. Old residents upgrading their living standards are selling their relatively old fashioned homes, and buying more modern apartments with elevators and parking. Many are moving to nearby neighborhoods such as Arnona, Baka and Talpiot. As a consequence, many young couples and young families are moving in because the prices relative to prices in other parts of Jerusalem can be considered inexpensive”.

The past three years have brought hundreds of young couples and young families with small children who have been out-priced from surrounding neighborhoods.

Besides young couples and families, which make up about 75% of the current buyers on the market, investors have also been buying property in Armon HaNatziv. They have been able to get annual yields of from 4% to 5% on their investments because there is steady demand for affordable rentals in Jerusalem.

It is also an area which is attracting retired families who are relocating. With parks, manicured lush lawns in the main valley, and all the views, it’s a beautiful place to retire. . Prices have definitely risen these past few years with properties now selling for between NIS 14,000-18,000/sqm for the streets closest in proximity to Arnona (like Adam, Elkachi, and Remba), and between NIS 10,000-14,000/sqm for the streets further away, like Barazani, Ben Yosef, and Rubovitch. Three years ago the most expensive properties were going for NIS 11,000 nis/sqm, and you could still find a property somewhere for NIS 500,000. Now the most inexpensive property on the market is in the NIS 750,000 range.

An additional factor which is making Armon Hanatziv even more attractive, is the fact that the Young Neighborhoods Project, an official project of the Jerusalem Municipality, is active in the neighborhood. The purpose of the project is to help attract singles, students and young families to the neighborhood, and has been working with residents to understand what is needed in the area. The result has been recent improvements, such as some new children’s parks, additional bus lines etc., and a large number of activities being provided by the community administration.

Armon HaNatziv is an enigma. A quiet neighborhood on the outskirts of Jerusalem with commanding views of the surrounding areas, yet inexpensive relative to more centrally-located neighborhoods. It is still possible to acquire properties with stunning views for slightly more than NIS 1,000,000.

In real estate, location is everything, and Armon HaNatziv has a lot of what makes up that everything.

So why don’t prices shoot up? The only plausible explanation is that there is still a social stigma of sorts in living in Armon HaNatziv. Despite all its advantages it is still not ‘IN’.