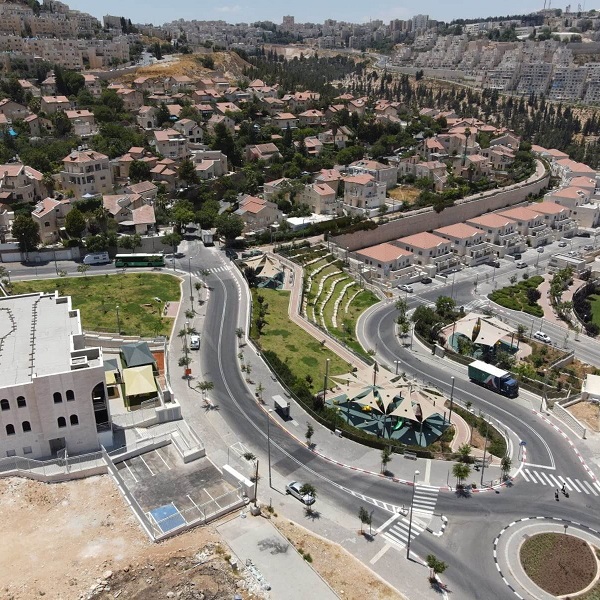 Pisgat Ze’ev (Hebrew: פסגת זאב‎, lit. Ze’ev’s Peak) is an Israeli settlement in East Jerusalem[1] and the largest residential neighborhood in Jerusalem with a population of over 50,000.[2] Pisgat Ze’ev was established by Israel as one of the city’s five Ring Neighborhoods on land effectively annexed after the 1967 Six-Day War.

The international community considers Israeli settlements in East Jerusalem illegal under international law, but the Israeli government disputes this.[3]

Archeological evidence shows that in the biblical period, the site encompassed small agricultural villages along routes north from Jerusalem to Nablus and the Galilee. The villages made use of varied water-catchment strategies and served the needs of Israelite Jerusalem, including as a major producer of wine and oil for use in the Temple in Jerusalem.[4] Three ritual baths from the Second Temple period have been excavated in Pisgat Ze’ev.[5]

The Byzantine period saw the villages’ primary use shift from agriculture to service religious functions, such as churches and monasteries. A large monastery from the period was located at the site’s highest point, Ras at-Tawill. The monastery was likely active from the end of the 5th century to the close of the 8th century, and included a mosaic-floored chapel above a burial cave, as well as an oil press and a cloth bag of 200 coins.[4] An oven and pots from the Iron Age were also found nearby.[4]

Overlooking the neighborhood is Tell el-Ful, believed to be the capital of the Tribe of Judah and site of the Israelite King Saul‘s palace. King Hussein of Jordan also began constructing a palace there.[4]